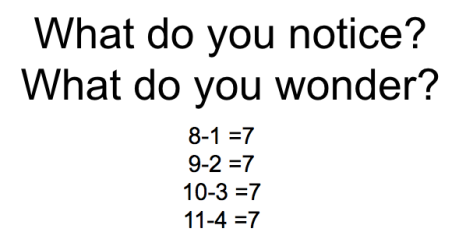 Yesterday morning, Dan, Bill, and I were discussing this pattern as we planned the lesson we were about to collaboratively teach to Bill’s 6th grade math class.

Bill: “What I wonder is what happens if I go below zero? Can you go in both directions.”

Dan: “As a teacher, I wonder about the word wonder. If you have kids wondering at all, you are in a good place and it is a hopeful statement. There are kids who won’t wonder and the goal is to get them to that place.What about the kids who says, “why are we doing this?”

Bill:  “And I would say that since I have been using this language this year, because I didn’t use it at all last year, they are really into it because it is so accessible to all of them.”

Me: “And there is no wrong answer. Actually, if somebody said, ‘I wonder why I have to do this’ I would probably say that is a great question. I hope you can answer it by the end of the class.”

Dan: “Bill, you have me curious right away.  I want to know the body of the language you are talking about.”

Bill: “Those two questions. What do you notice? What do you wonder?  I love them because, for kids who might struggle with getting an answer, I’ve got them hooked! At least for the beginning.”

Sarah: “So the point of starting with this is that the answers are already there. I am not asking them for answers. I am asking them what they wonder about those answers.”

At this point, I showed them the next slide:

Dan: “……The increase and decrease must be equal.”

Bill: “Will it work with a decrease? I wonder.”

Sarah: “so, to arrive at the same number in what…”

At this point we realized that we didn’t have the vocabulary we needed to state our claim. We all remembered the answer being called the “difference”, but we wondered, “is the first number in a subtraction problem the subtrahend or the minuend?” We looked it up online.  We decided we would use these words throughout the rest of our discussion and with the students. We wondered if we might remember them in the future because they came out of the problem solving. We needed them. We weren’t just asked to look them up along with 50 others.

I restated our claim,”okay so what you are saying is to arrive at the same number for the difference, you need to increase the minuend and subtrahend by the same amount.”

The next step was to find evidence to support our claim. We all tried different problems. We explored going below zero.  We felt pretty confident that our claim worked.

Then, I showed them the next slide.

Dan described how he was “seeing” it: “Eleven is a higher elevation so base camp is seven and the farther you climb up, the greater the distance to base camp. So if it is 11,000 foot peak, it is 4,000 feet down to the 7,000 foot base camp.”

I drew what he was describing on the whiteboard. 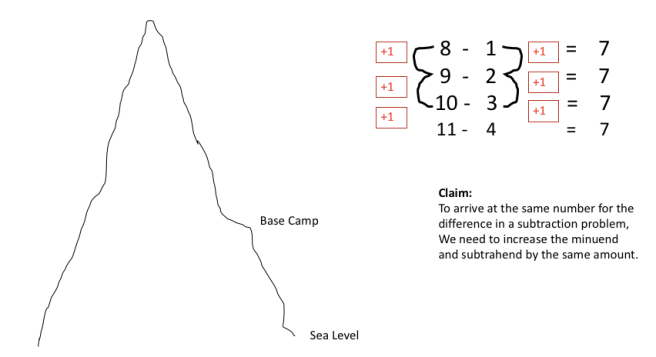 This is where the conversation got really interesting. I was picturing a different representation in my head so now I had to figure out how to understand Dan’s thinking.

I asked, “Where are our numbers in your representation?”

“Well,” Dan said, “It is not the same because the difference is ever increasing.”

I wondered, “So where is that in our numbers?”

“It is the difference between the minuend and the subtrahend… it is increasing all the time… No. No it is not by definition because it is 7…. because they are increasing by the same amount….”

“You originally said base camp represents 7. Where would 8 and 1 be?”

“8 would be here… and the  distance from here to here is only 1.” Dan recorded his thinking as he spoke.  Below is my rendering of what was on the whiteboard.

I still couldn’t see it. I asked, “Where is our claim?”

Dan said, “I am not sure the picture translates to our claim.”

He added, “It stays the same because it is not…. if you looked at it as what is it going to take to get back to base camp…it will be a different amount, but base camp is always the same so if you go up farther, you have to come back farther. If you go out 27, you have to come back 27, but 27 is going to be a measure of, in this case, elevation from sea level which is the distance you’ve gone plus the 7,000 feet of base camp.”

I was still struggling to see it.”So, I need your help now because what your saying makes sense to me.”

“But I am not translating it well to the claim.”

I decided to share my thinking. Maybe I could adjust my representation to accomodate for Dan’s context. I shared, “The representation that I was picturing is a slide.  When you originally started talking about base camp, I was thinking of that (slide) happening on my representation, but now I can’t see it. I pictured the slide being the same distance traveled by people starting and ending at different locations on the mountain.”

I drew this on the board:

We all thought for a while.

“Well…base camp is not going to move.  So you can go up as far and come back as far as you want, but you are always going to have the same difference from sea level.”

I still wondered, “So what would sea level be over here.” I pointed to the original equations.

“It is the difference between 7 and 0, but I am doing that knowing the visual – zero is not represented in that chain of problems.”

Wow. I was really struggling to wrap my head around how Dan’s visual represented our claim.  I kept asking myself, “where do I see this in that?”, but I was struggling.

At this point, we had to move on. We were supossed to be teaching this lesson in 20 minutes and we hadn’t even gotten to the visual pattern part of the lesson – the main part of the lesson. I decided I was going to let this idea simmer and come back to it when I had some time to think.

Fortunately, we have a snow day today. I woke up early and  reread our conversation from yesterday. I thought about what Dan was trying to say. I tried to adapt my representation to show  what Dan was describing. This is what I came up with:

I still wonder, does the context of sea level and base camp represent our claim?  Are  constant distance and constant difference related?  If yes, how? How are they similar? How are they different?

I don’t know the answers to these questions, but I am so grateful that Dan and Bill and I explored them before we went into the classroom. We didn’t get to the representation part of the lesson with the sixth graders, but they had some interesting questions of their own.

Many of them noticed the constant difference pattern and were able to articulate it as a claim.  They also found evidence to support the claim. They, like us, were prompted to think deeply and wonder about relationships.

And my personal favorite:

One student actually provided and supported an answer to this question. What do you think it is?  Go ahead.  Extend your roots.

... a journey around exploring mathematics with young children