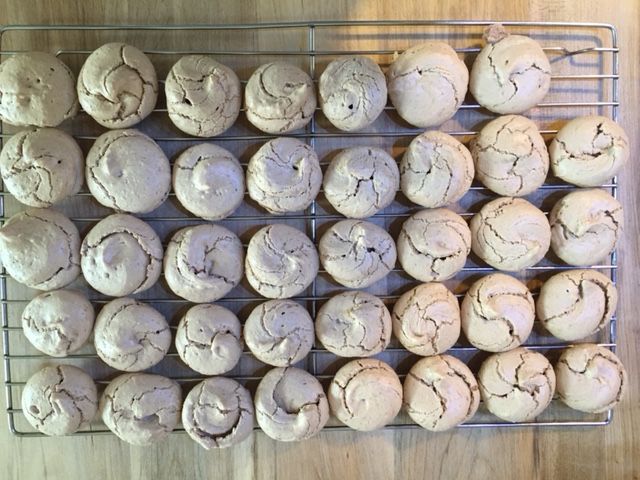 Recently, my colleague Mrs. Shink,  showed me this picture. She was baking macrons with her family. She told me she was going to use it with some of her second graders.  I asked her if I could use it too.

I brought the picture into a second grade class. I gave each student a color copy of it. I asked, what do you notice? What do you wonder? Here is what they said:

I wonder why there is a spot with no circle.

I wonder if someone ate one.

I notice there are 7 on the top row and 8 on the other rows.

I notice some have holes and cracks.

I notice they are different sizes.

I notice that if you go down there are 5 and the one with no spot, there is 4.

I notice there is a metal thing underneath the cookies. I wonder if they just came out of the oven.

I notice there is one small one and the rest are big.

At this point, I noticed that some students were thinking about the context of the picture, some were organizing the objects into groups, some were noticing characteristics of the objects. I was particularly interested in the last student who spoke. I wondered if this student was thinking about decomposing the array to make it “easier” to see.

I gave the students more information about the picture.  I told them where it came from.  I also told them that one was missing because Mrs. Shink had eaten one.  Then, I asked them if they could figure out how many macrons were left after Mrs. Shink ate one.

They got right to work.  Many students started counting by ones.  Some students organized the cookies into two groups – ones that were darker and ones that were lighter – and then counted each group and added them together. A few students skip counted by groups or added groups. I noticed some students orally skip counting by fives.  A different student was adding 8s on the side of his paper. I asked the class if they could somehow show me their thinking so that when I took their pictures with me, I would be able to understand how they counted the cookies.  Many students started labeling each cookie with a number: 1, 2, 3, 4, etc.  The students who were orally skip counting wrote an addition equation:  5 + 5 +5 +5 + 5 +5 +5 +4 = 39.   I wondered, “what is the difference between skip counting and using repeated addition?”

When I originally planned this lesson, I was anticipating that the routine would inspire discussion about multiplication.  In my head, I remembered a second grade standard about introducing arrays as representations of multiplication.  I was wrong.

Here is the standard that I was thinking of:

Use addition to find the total number of objects arranged in rectangular arrays with up to 5 rows and up to 5 columns; write an equation to express the total as a sum of equal addends.

What do I notice?

The word multiplication is never mentioned.  The size of the array is limited to 5×5.

As I was reflecting about this lesson, I realized that I was remembering the story wrong. Recently, I watched Graham Fletcher’s shadowcon talk about becoming a better storyteller.  In it, he challenged us to find one standard in the grade level you teach and discover something new about it. Is there something you currently teach that isn’t in the standards? He suggested:

This was my chance.  I decided to start by re-reading the Common Core Progression for Operations and Algebraic Thinking.  I have read this document many times and I will read it many more.  I always learn something new. Immediately, this sentence jumped out at me.  “In Equal Groups, the role of the factors differ.  One factor is the number of objects in a group (like any quantity in addition and subtraction situations), and the other is a multiplier that indicates the number of groups.”  We have spent a lot of time in our 3rd grade meetings discussing how three groups of 5 items is different than 5 groups of 3 items, but 3×5=5×3. This is one of the topics we always leave simmering.  Our understanding has gotten richer and more dense over time.

Recently, I have been watching a few fourth  grade teachers bang their heads against the wall as they try to convince their students that adding 13 forty seven times is not efficient. I have felt helpless. I ask,  “Have you tried showing them arrays with smaller numbers?  Have you tried using the Number Talks Images site?  Have you tried having them compare strategies and articulate someone else’s understanding?”   Yes. Yes. and Yes. Commence banging.

As I write, I am wondering, maybe what we need to do is put these students back on the stove?  We keep trying to pull them towards multiplication, but maybe what they really need is to dive a little deeper into their understanding of repeated addition.  Last week, one student was trying to use an open array to show 26 x 8.  He didn’t want to break the 26 into 20 + 6.  He wanted to use 26+26.  What should I do with this? Graham Fletcher might say, “Draw it. Use tools to understand it.”

Here is my example of what I see these students doing when they are confronted with a two digit by one digit multiplication problem. 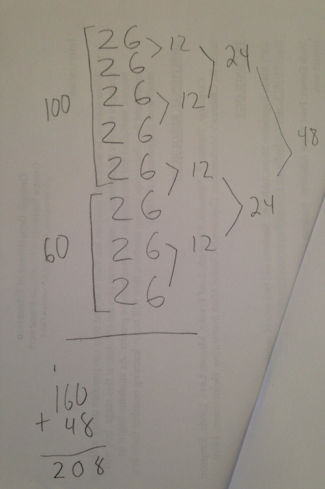 We want them to do this: 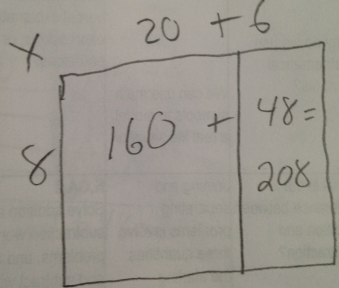 When I sat down to draw in an effort to further my own understanding of how repeated  addition connets to multiplication, here is what I came up with: 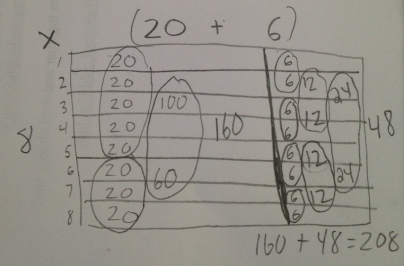 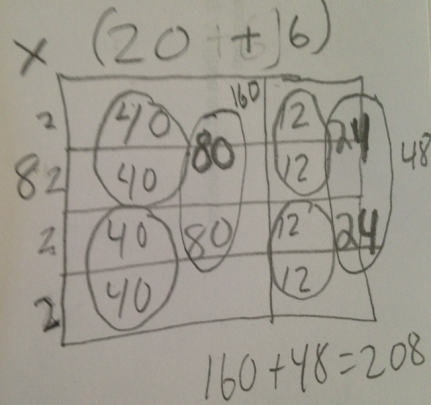 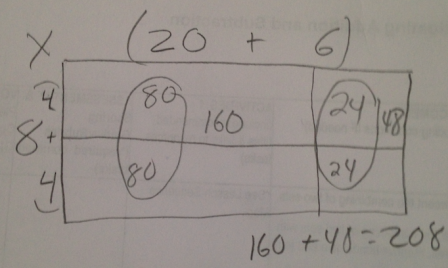 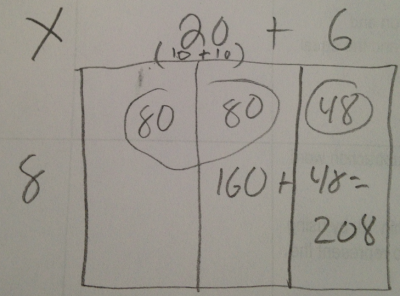 Wow!  Graham Fletcher was right. I learned a ton.  I realized that decomposing 26 into 20 +6 might not be helpful to students if they don’t understand the 20 as being equivalent to 2 x 10. I also learned that there are a lot of steps in between using repeated addition and using an open array and the distributive property to solve multiplication problems.

Let me be clear. I am NOT suggesting that we teach students all the steps that I just did. The drawings above represent my journey towards understanding the story better.  My next step is to go back to the fourth grade teachers.  I will retell my story of repeated addition and multiplication.  Then, I will listen carefully and unassumingly to their stories. Together, we will map out the next chapter in the book.