Do yourself a favor.  Close your eyes.  Picture walking down a street.  When you look up, you see some birds on a wire.  Pause for a minute and get a clear image of what you see. Try to describe it in words – maybe jot down some notes – but DON’T try to draw a picture. Just use words.  It would be wonderful if you could share your thoughts,  in the comments, when you are done reading the blog.

I spent a good portion of Valentine’s Day engaged in a fascinating conversation on Twitter. It was one of those conversations that had a lot of twists and turns.   The conversation started like this:

Then it went here: 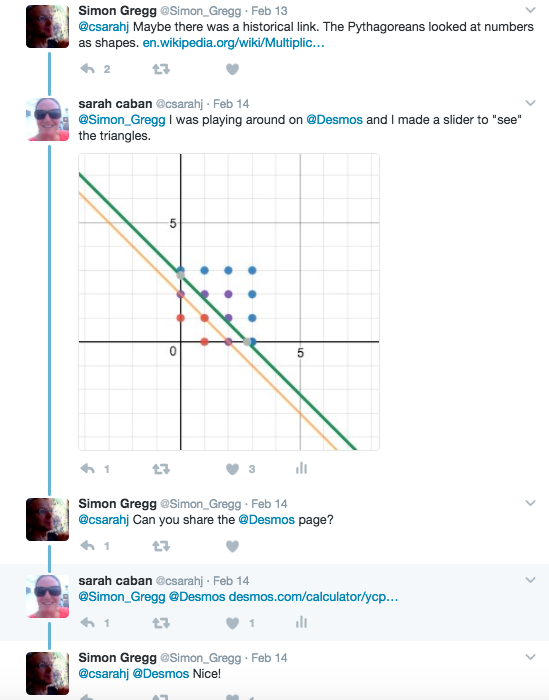 Simon has blogged about a lot of fascinating math explorations.  When I mentioned that I wanted to explore geometric representations in other base systems, Lana told me that Simon had written a blog post about that.  “Of course he did”, I said.  Then I wondered, “Is there a question that Simon hasn’t written about yet?”

Here is my response to Simon:

Simon told us that this question was inspired by a quote from Borges:

If, in my minds eye, I see more birds than I can subitize, can I ever truly count them in their original form? Can I capture them? Or will they always be a “clump” somewhere between 10 and 15?  When I try to count them, do I change them?  By assigning them a number, do I bring them into existence?

I decided to ask my husband what he saw.

What does our mind do with indefinite numbers? Can we ever truly communicate what we see in our mind’s eye?

Lana and I decided we wanted to explore this with children.  She shared some beautiful pictures that her students had drawn when she asked them about the birds. These were my favorites: 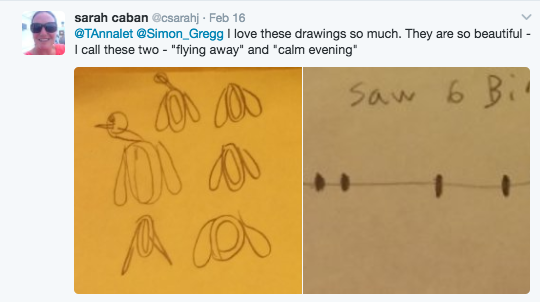 Lana got a lot of definitive answers from her students. I wondered if the pictures were what the students originally saw or were they manifestations of what they orginally saw. Did the question, ‘how many?’ change what they saw?

I decided to ask my own children to answer the question.  Based on what Lana found, I changed my approach.  I interviewed my kids separately and I devised  a follow up question. We don’t often see groups of small birds sitting on telephone wires in rural Maine.  When I think of birds on a wire, I think of a lone hawk or an owl.  I wondered what my kids would say if I asked them about turkey vultures. We often see large groups of turkey vultures circling in the sky.

First, I asked my 11-year-old daughter. Here is what she said:

Then, I asked my 7-year-old son. Keep in mind, this is unedited.  Therefore, you get to experience my home at breakfast time.  Yes, my son is taking this opportunity to talk about bird poop “on the record”. Yes, my husband is yelling at the dog in the background. This is my life and I love it. Here is what my son said:

He continued talking about the turkey vultures and he said something that I found fascinating. I asked him if he saw ten the first time or if he “made” ten so that he could count them more easily.  He told me he made ten so there could be an even number for his circle. I asked him if he could draw a picture for me.  He tried, but he got really frustrated: 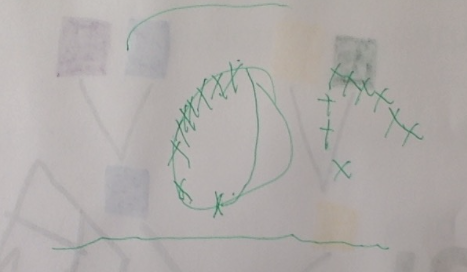 He was about to give up because he couldn’t make the picture represent what he was seeing in his mind. I gave him some pennies. Watch what he did:

He miscounts the pennies in the circle.  I don’t think that is important right now.  He is grappling with bigger questions. He is trying to communicate bigger ideas.  He is trying to translate what he sees so that I can understand it. It is time for me to listen. I love this video.  I have watched it many times.  I will watch it many more.

Some nights, after dinner, My husband and I walk around our driveway. We live in the woods. Our driveway is long.  We look up at the stars.  Sometimes we walk together and sometimes one of us stops to look up at something and the other one keeps walking. Later, we meet back up again.  Last night, he was showing me how the big dipper and the little dipper are related. It is hard to have a conversation about stars because they are so far away.  It is challenging to decipher each other’s perspectives.  I was trying to find the little dipper.

“Is that it or is that the seven sisters?”

“Where are the seven sisters?”

“Over there. They are also called the Pleiades.”

“They are smaller than the little dipper.”

“Like a tiny dipper? Is the little dipper the one that looks like it is pouring water on the trees over there?”

“I guess it could look like that.  It depends on how you look at it. The handle on the little dipper points to the North Star.”

I was watching Orion’s belt.  Each time I walked a loop, I would look up at Orion.  After the third time, I saw what I thought was his bow.  I asked my husband, “Am I supposed to be able to see Orion’s bow? I think I can see it in that line of curved stars.  Can that be his bow if his belt is so much smaller?” My husband just listened.  “I’m not sure what you mean,” he said, and we kept walking.

I looked up, but it was too late. I missed it.

He stopped and stared for a while.  He said, “I am going to make a wish.”

Over the last year, I have thought a lot about the overlaps between my relationships with students, my relationships with teachers, and my relationship with the people I love. I have been trying be a better listener.  Recently, I noticed that I have gotten better at listening to students.  I still need to work on being a better listener to teachers and loved ones.  I wonder if love lives in the space where we try to understand each other?  What would happen if every single  person in the world decided to simultaneously listen to every other person?  Would there be a profound silence?  What would follow the silence? Who would speak first?  What would that person say?  Would we listen?