Last night, at 10:00 p.m., I left the Phoenix airport.  Eleven hours and three airports later, I arrived at my home in Maine.  I made myself a sandwich and a cup of coffee, changed my clothes, brushed my teeth, and headed to school.  I was exhausted. I had a headache.  My brain was pretty foggy.  I was scheduled to meet the 6th grade teachers at one of our elementary schools at noon.  They were going to observe me do two number talks in two different 5th grade classrooms in two different buildings.  All I could think was, “What the hell was I thinking? These are going to be the worst number talks ever.” I tried to plan them on the plane ride, but I kept falling asleep.

I was so tired on the drive to Wayne that I had to turn the music up really loud to keep me awake.

I was late. I was kind of on the verge of tears – not because I was sad- but because I was just so exhausted – physically and emotionally.  I was tapped out. How was I going to model a successful  number talk when I could barely keep my eyes dry and open?  On the way into the building, I started to berate myself:

Fortunately, it was a short walk to the building.  When I arrived at Sue’s room, she looked up and smiled. I said, “I am so sorry I am late.” She told me not to worry about it and I could tell she meant it.  The sixth grade teachers spilled in behind me. I introduced everyone.  I asked the kids if they would like to do a number talk with me?  They were all smiles.  Sue walked over to the white board and grabbed a marker. She asked, “do you want me to record?”

I showed Sue the number string I was thinking of using and told her we could go as far as she thought we should. She said she thought it was a good fit and wrote on the board:

“Did anyone get a different answer?”

“Who wants to tell us how they solved it?”

Sue said, “do you want to come up and show us or would you like me to record for you?”

“I would like to record it. I used the number line,” he smiled and looked at Sue “Mrs. Hogan has been working on this one. It isn’t her go-to strategy.”

I asked him if he could tell us what he meant.  He looked at Sue and she nodded. She said, “it is okay. You can tell them.”

He continued, “the number line is a challenging model for Mrs. Hogan because she didn’t learn to divide fractions using models.  She likes to use the bar model, but lately she has been stretching herself.”

I asked him, “do you like using the number line model to divide fractions?”

“Yes. It is kind of my go-to strategy. It makes the most sense to me, but I can use other strategies too.”

“Cool,” I said. I sat down on the floor beside M so P had room to share. He drew a number line and told us, “You see.  I divided the two wholes into halves.  So I have four.”

“Four groups of one half.”

I asked if anybody else wanted to share a different way that they came up with the answer.

We moved on. Next we tried two divided by one third.  All the kids got six for an answer. A couple of different kids shared their thinking.  I asked them if they wanted to try something a little more challenging. I said, “I kind of want to find a problem where we get some different answers. So we can argue about them a little.”

Someone chimed in, “politely argue.”

I checked in with Sue about the next problem. She thought it looked great.  She said, “This one will be interesting.” 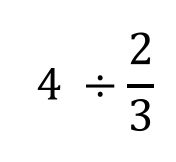 It was quite for awhile. The faces were more squishy. Somebody said, “hmm.” I said, “I am having a hard time doing this without a white board.  Does anybody else need a white board?”

I don’t think I was finished asking the question before everybody was grabbing white boards and markers out of the container.  I got to work.  After a few minutes, I looked up and noticed several kids had started to check in with each other.  M was sitting next to me. She had drawn three different models on her whiteboard.  Each one had shown the answer as 4. Her board kind of looked like this: 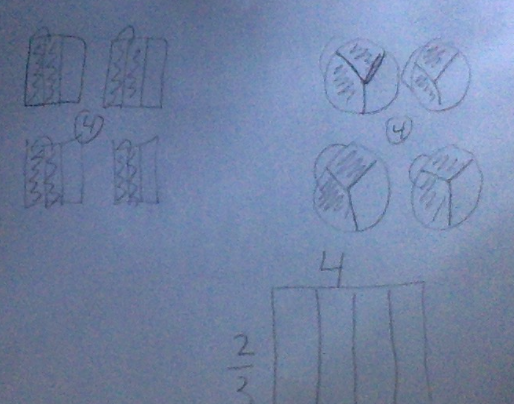 She said to me, “I am trying to use an area model, but it is really hard to use an area model to solve fraction division problems.” I looked at her white board. I think she was referring to the diagram in the lower right. I sidled up next to her.  I told her, “I struggle with using the area model to show division problems.  I have a hard time remembering which part of the model is missing.” She looked at me with the biggest smile and said, “you just made me feel really good. I don’t know how to do something and it felt good to hear that you didn’t know how to do it either.  You know how that happens sometimes?”

At that point, she looked at my white board. I had drawn a number line. She said, “you got 6 for an answer and I got 4.”

She stared at my work for a little while. She said, “Your answer makes sense to me, but so does mine.”

At that point, Sue called everybody back to the rug.  She said, “I noticed that some people got different answers. I heard a lot of you talking about your answers and trying to help each other see whether or not they made sense.”

W said, “At first I thought the answer was 4 twelfths, but then E helped me figure out what I was doing wrong.” He walked up to the board and started to draw a long skinny rectangle.

Now, somebody else chimed in.  She said, “you can make more groups of two thirds.  You can put those thirds together.”

M said, “Ooohhhhhhhh! It is six!”  She started coloring in her extra thirds to make two more sections of two thirds.”

“Yes!”  W agreed.  “That is exactly what I did.” He proceeded to show us how to combine the extra thirds in his diagram.

At this point, Mr. Getty, one of the visiting sixth teachers asked the kids, “How do you know which strategy to use?”

M looked at me and said, “or like us with the area model.”

The discussion went on to include how some kids like to use multiplication to check their answer or how it is helpful to make the groups of two thirds next to each other in the picture.  We muddled through some stuff.  We noticed a pattern that if you are dividing a whole number by a unit fraction you can multiply the whole number by the denominator and get the answer. Sue told us the kids have noticed this before.

“Hmmmm,” I said. “Maybe we should try this out for awhile and see what happens.”

On the way home, I was debriefing the lesson in my head.    I wished I would have asked the kids if they ever chose a strategy based on the number. Nobody saw a relationship between 2 divided by 1/3 and 4 divided by 2/3 – including me because I didn’t take enough time to plan.  But how about M telling me I made her feel good!  That just made my week. I wondered if I let the number talk go on too long and should I have suggested whiteboards? But W got up on his own to tell his whole class that he got the wrong answer!  That kid has come so far in 5 years. I wondered if it was okay to use the language “groups of” when we describe dividing fractions. But Sue!  How about Sue?  Three years ago, when I walked into her classroom, her kids were sitting at desks lined up in rows and listening to her explain how to do the algorithm while they waited patiently for there practice worksheets.

We laughed about this at our debriefing meeting with the sixth grade teachers.  They asked her, “what made you change?”  She said, “I stopped being scared. I found a place where I felt safe to take a risk and just be honest with my kids. I tell them, I am learning too and sometimes I have to go back to the algorithms because it is all I know, but I never stop at the algorithms. I always keep trying other strategies and models because that is how I learn to understand the math better and I love it!”

And that made me feel really good.