A week ago, I facilitated a learning lab in a fifth grade classroom. We were trying to explore these questions:

Two nights before the fifth grade meeting, I attended a class with Kristin Gray. Kristin encouraged us to consider how we illicit and analyze student understanding. She guided us through some great activities and encouraged us to try them and think about what we learned about student thinking.

I decided to try using a Numberless Word Problem and Talking Points. I have used Numberless Word Problems before, but I had not tried asking the students to choose their own numbers.   When I shared my ideas with the 5th grade teachers, we decided we would end the lesson with a journal prompt. This would give us an opportunity to juxtapose student’s verbal and written responses.

We planned on spending more than one class on these objectives.  The learning lab was our first step.

I started the lesson by introducing a numberless situation:

This prompted immediate conversation and, understandably, the students wondered more than they noticed:

Then, I gave them the rest of the problem, but I intentionally left out the specifics.

This is where things started to get interesting. I asked for some possible numbers that we could use in this problem.

One student, T,  volunteered that he would like to use one-quarter of a mile as the length of the driveway and 2 miles as the amount that I wanted to walk. I asked him how I should write “one quarter”. He said I should write one-fourth. I wrote down 1/4 mile and I asked him if he could tell me what one quarter was as a decimal. He said, “point seven five.” I said, “and how would you say that as a decimal?” He responded, “seventy-five hundredths.” I waited. Nobody said anything. After several seconds of silence, one student said, “Wait. I don’t think seventy five hundredths is one fourth because .75 times 4 is going to be more than one whole.”

I asked T, “What do you think about that?”

I told him that I was going to collect some other numbers from people and he could have some time to think about it and let us know if he wanted to change anything about the numbers he chose.  Then I called on two more students and they shared their ideas for numbers. I was just about to move onto the next part of the lesson when one of my colleagues chimed in, “hold on,” she said, “you forgot to go back to T.”

“Because there are four quarters in a dollar and one-quarter is twenty-five cents or twenty-five hundredths.”

“Awesome. Thank you so much for sharing your thinking with us.”

At this point, I asked the students to choose any of the suggested pairs of numbers and solve the driveway problem.  Many students chose to try the first three sets of numbers and they approached the problem differently. Most students arrived at answers that made sense for these numbers, but my favorite conversation involved justifying how many times I would have to walk around a driveway that is 9 tenths of a mile long if I wanted to walk 1 and 8 tenths of a mile.

As students were checking in with each other and defending their solutions, I stumbled upon a fascinating argument bubbling up.  Is the answer 1 or 2? 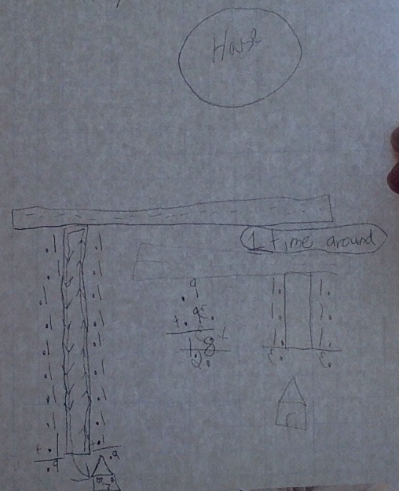 I looked down at this student’s paper and saw the number one circled. I asked, what do you think the answer is?

Wait. What? “Can you tell me more about that?”

“What do you mean  walk around?”

“You will have to walk up to the end of your driveway and then back down again to your house so that is one full loop.”

Whoa. I did not see this coming. I assumed when I told the kids that I walked around my driveway they would picture a circle.  Some groups actually asked me what my driveway looked like. This one didn’t.  Once again, my assumptions failed me.

Huh.  Fascinating. What do I do with this?  I decided to call everybody back together.  Both groups did a great job of arguing their points.  We decided that the solution would depend on how you interpreted what constituted a trip around the driveway. Interestingly, they all agreed on the math. It was the interpretation of the math that was nuanced and arguable. 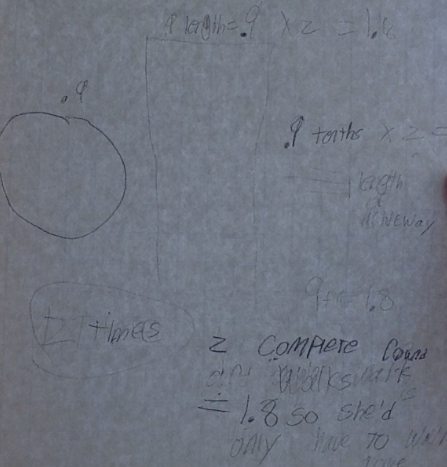 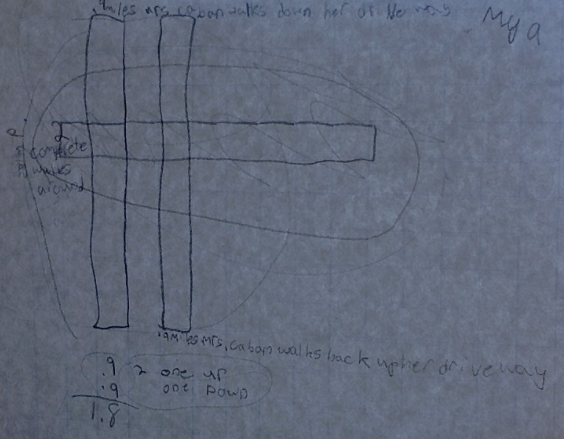 We spent some time discussing how many times I would have to walk around my driveway if it was .3 of a mile long and I wanted to walk 1.5 miles.  We had a similar discussion about whether I would need to make 5 trips or 3 trips.  My favorite comment in defense of 3 trips:

“Why would she just stop at the end of her driveway?  What is she just going to stay there forever?”

I was really curious to see if any of the students tried to use the numbers .99 for the length of my driveway and 1.999 for the amount that I wanted to walk.  Some did. Have I mentioned how much I love working with this class?

One student started the conversation by telling us that it couldn’t be done. Here is his work:

Another student argued, “Sure it can be done. She just needs really small feet.”

I prompted, “Tell us more about that.”

“Well, she would only have a teeny space left after she walked up and down so she would have to have teeny feet.”

Wow. At this point, I didn’t know what to do. Should I jump down this rabbit hole?  I looked at the 6 adults in the room.  We hadn’t even gotten to the talking points yet.  I asked for advice.  Should we explore this?

Fortunately, these teachers know me really well. They know that I am mildly addicted to rabbit hole jumping. They are type As and I am type B through Z. Many of them were shaking their heads no. Mrs. G gave me an out. She said, “I wonder if I could come back to this conversation with my students.  We definitely have a lot to talk about, but I would like to see what they do with the Talking Points routine and I worry that we won’t get to it.”

I introduced the Talking Points routine.  These kids are used to engaging in math discussions so they adjusted to the expectations fairly quickly.

I wondered if they would have any disagreement about whether you learn something every time you get an answer wrong.  They didn’t. They all said making mistakes helps you learn. Mrs. G and I talked about this afterwards and she decided she was going to continue to revisit this talking point.  We wondered how we could get them thinking about how we actually learn from our mistakes – just because we make a mistake doesn’t mean we learn from it.  I was glad to see that none of the teachers pushed this thinking on the students. If they go there, I want it to be organic, not because we told them so.

The students had the gist of the routine so we moved on.  We asked them to think about this prompt and decide whether they agreed, disagreed, or were unsure about it.

I settled down next to a group of students and watched them. Each of the students did some work on his/her whiteboard. When it was time to discuss, the first three students in the group disagreed.  I watched M carefully. I knew that, on her board, she wrote agree and her math confirmed her opinion.  As each person in her group spoke, she covered up more of her white board. By the time it was her turn, she had her white board pressed firmly against her stomach so no one could see it.  She looked at me. I told her she should share her thinking, regardless of whether it was different.  I reminded her that this routine was about learning from each other.  She and I have a good relationship.  I am so grateful for that.

She described to her classmates that there are 20 groups of one tenth in the number 2. She showed them her number line. Then, each group member went around a second time and shared whether or not they had changed their thinking.  Several students changed from saying they agreed to saying they were unsure.  They sited M’s explanation as their reason for changing their minds and explained that they were still wondering about the difference between 20 groups of one tenth and 20 tenths.

At this point, we were almost out of time. I really wanted to give the kids a chance to write. We gave them a choice for writing prompts:

We got some really interesting responses: 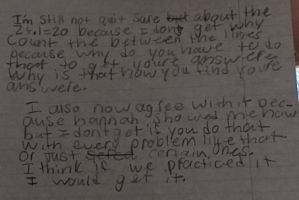 So… at this point, I have a classroom full of students who are still unsure about a whole lot.  This makes me feel unsure about a whole lot.  Understanding division is hard. Understanding division of fractions and decimals is really hard.  Some students wrote about how the answer couldn’t be 20 because when we divide the answer gets smaller. Several students were representing the driveway problem with incorrect equations:

There is not doubt in mind that there is a lot about dividing decimals that these students don’t know yet.  Sometimes, when I think about all the things my students don’t know, I get overwhelmed.  I find it more helpful to think about what they do know.  I think these students know a lot.  They know that context matters.  They know that it is okay to make mistakes. They know it takes time to truly understand something. They know that there is a relationship between multiplication and division and also a relationship between addition and division.  I am looking forward to revisiting this class next week and continuing the conversation about all of the things they still wonder.

Kristin, I will definitely use these two routines more often.  I learned so much.  When I asked the fifth grade teachers what they learned, they said:

and I would add…

One thought on “The Lure of a Good Rabbit Hole”