Yesterday, after I taught math in Kindergarten, I went into my colleague’s office and cried. I didn’t see it coming. I was not prepared for it. Once I started, I had a hard time stopping. My friend Deb came in and asked, “what is wrong?”

“I still carry shame about learning, school and Math.”

I told Deb. “It just sneaks up on me. I think I am over all that shame baggage, and then it comes back. I have just been thinking a lot about “those kids” lately. This past week I have worked with so many kids who hate math or think they are stupid.  Kids who don’t fit into “the mold” for one of a million reasons; because they don’t think like we want them to, they don’t learn fast enough, they don’t learn in a straight line, and maybe they can’t remember things or they mix things up.

“I am those kids!” I started crying again. “I was an English Major. I hated math. I was miserable at it. It was my worst nightmare. I got the message that I was not smart.  But, here I am! I am a district math coach! That’s great, right? I moved past it. I am in love with math. I am okay with confusion. I am drawn to things I don’t understand. I can be a role model, right? But still, deep down, sometimes, there is that little voice that wonders, ‘what if I’m not good at math? I know. There is no ‘good at math’. I know that. My rational brain tells me that ‘good at math’ is a farce, but sometimes, I just let that self-doubt creep in.

Last week I was in a high school math class. I asked the kids to tell me some words that described how they felt about math. They told me, ‘it is hell’ and ‘it sucks’. Some kids actually said things that were positive which was awesome.  One girl told me math was fun if she was baking. But another girl told me it was loathsome.  When I asked her to think of a word that described how she wanted math to be, she said, ‘tolerable’. That is it. That is all she wants; for math to be tolerable. 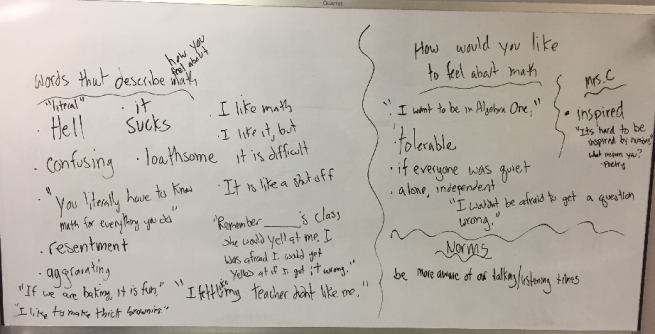 I told her, ‘I want to show you that Math can be inspiring.’

She said, ‘numbers don’t inspire me.’

I asked, ‘what inspires you?’

I told her I was going to challenge myself this year to help her find math inspiring.

Then, last week, when I was in 5th grade, you know the blog post I wrote? Those boys have confessed to hating math in their lives.  They have told me more than once that they can’t do it. Those boys are amazing thinkers! Seth’s mom texted me after that math class and told me he talked about math the entire ride home!

Max, the other boy, asked Mrs. G and I , ‘why can’t math class be like this all the time?’ We said, ‘it can! You just need to keep asking questions.’ That is awesome, right! I should be happy about that. I am happy. I just had a hard time this weekend, while I was doing the math. Those boys inspired me. They inspired my friends on Twitter. We spent all weekend trying to solve problems about repeating decimals. I kept thinking about Seth and Max and their questions. At one point, I couldn’t tell where my thinking stopped and Max’s began. But, I made some mistakes. The people I was working with seemed to ‘get it’ a lot faster than me. I asked questions, that afterwards, seemed obvious. 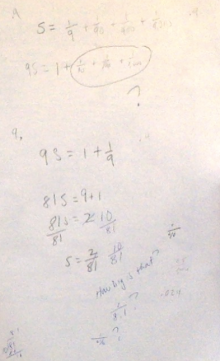 I am not sure what happened, but I started to doubt myself, somewhere in the middle of all those decimals.

After we taught Kindergarten, I came in here, composed a tweet, and started to cry.”

I think at this point, Deb said really nice things about me.

I know those nice things are true.  I know I am good at my job. I am pretty sure I inspire people to think differently about how they teach and learn math. Maybe it is not a bad thing that I am so sensitive to feelings of inadequacy.  Sometimes, I think it would be better if I could block them out, but maybe it is okay to let them in. I just need to remember:

So, I need to share one more story with you. Remember the Kindergarten class that I mentioned above?  Deb, Katie, and I have been meeting monthly to plan and teach a lesson together.

We are trying to learn more about how kindergarteners learn to record their thinking. Today, we decided to introduce a body sized ten frame. ( I forgot to take a picture of it before I left it with the kindergarteners so here is a picture from last year:)

These kids haven’t done a ton of work with ten frames, yet, so it was really interesting to hear what they noticed:

And here is what they wondered:

Listen to what happened next:

I will call him Colin. Remember him.

After we introduced the body sized ten frame, we handed out collections of shapes. All of the collections were less than twenty.  We invited the students to use paper plates, cups, or ten frames to help them organize their count, if they wanted to.  We also gave each of them a recording sheet. Then, they went to work.

As I was circulating and chatting with students, I came upon Evan.  Evan’s shapes were scattered across the table. His recording sheet was on the floor and he didn’t have any organizational tools. I asked him, how many shapes do you have?

I said, “I think you can do this. I wonder if one of the organizational tools would help you.” I invited him to visit the table and see if any of the tools interested him.

He came back with a paper that had three ten frames printed on it. He sat down and began to put one shape in each of the squares. When he finished, he looked up at me and smiled:

I asked him, “how many shapes do you have?”

He gestured with his hand, sweeping it down the entirety of the full ten frame and said, “one full rug”. Then, he quickly waved his hand over the rest of the shapes and said, “and one half a rug.”

Then, I asked Evan, “how many shapes is that?”

He counted sixteen because he forgot the number thirteen.

I said, “I think you might have forgotten the number 13. Let’s count together and see what we get.”

We counted together, Evan smiling the whole time, and got 15.

“So,” I said, “When someone asks you how many shapes you have, you can say 15 or you can say one full rug and one half of a rug. That is pretty cool. Do you mind sharing that with the whole class when we come back to the circle?”

Evan beamed. He didn’t mind at all.

I walked away and was about to call everyone back together. Then, I spotted Colin’s paper: 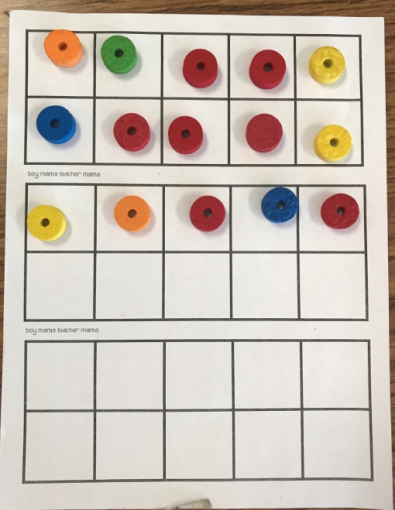 I asked Colin, “how many shapes do you have?”

I asked Colin to look at Ethan’s shapes and tell me what he noticed.

He said, “We have the same amount!”

I asked Ethan, “How many shapes do you have?”

Colin said, “Yeah! I have that too!” He gestured with his hands, just like Ethan did and said, “one full rug and one half a rug”.

I asked Colin if he would mind sharing what he noticed during our closing circle.

Originally, I thought I was going to facilitate the closing circle to highlight the ten structure. Ethan and Colin threw me a curve ball. They were thinking differently. They were thinking about one whole. I changed my plan. I drew models of Ethan and Colin’s ten frames on the board. I asked Ethan to tell us what he found out. He said, “I have one whole rug and one half of a rug.” Then, I asked him, “how many shapes is that?” He counted 15. I wrote it under his ten frame.

Next, I asked Colin to share what he learned. He said, “I had one rug and a half a rug.”

I wondered, “How many shapes is that?”

I said, “you told me that you and Ethan had the same amount of shapes. It looks like you got different amounts. What do you think about that?”

“Yes! I see that. You both filled in one rug and one half of a rug. Ethan says that is the same as fifteen shapes. You counted 24 shapes. Can we count your shapes again?  We can count together.”

I wrote the numbers 13, 14, and 15 next to three of the dots. I am not sure if this was the correct thing to do because I might have further confused the matter by assigning a dot a number name, but I was trying to give him a visual reminder.

At this point, Katie asked the students, “how many shapes do I have if I fill one of the rugs?”

Some of the students started counting. Some of the students were spinning around. One student was very busy trying to convince Colin that he counted wrong. It was 1:30 on the Wednesday before Thanksgiving vacation. They were done. However, right before we pulled them back together to close up, one little friend said, “ten”. “There are ten shapes in a whole rug.”

On my way out, Katie approached me. She said, “Thank you. Thank you for highlighting Colin and Ethan. They really struggle with counting. They felt so good about themselves today. I am so glad that I got to see what you saw. They counted!”

... a journey around exploring mathematics with young children